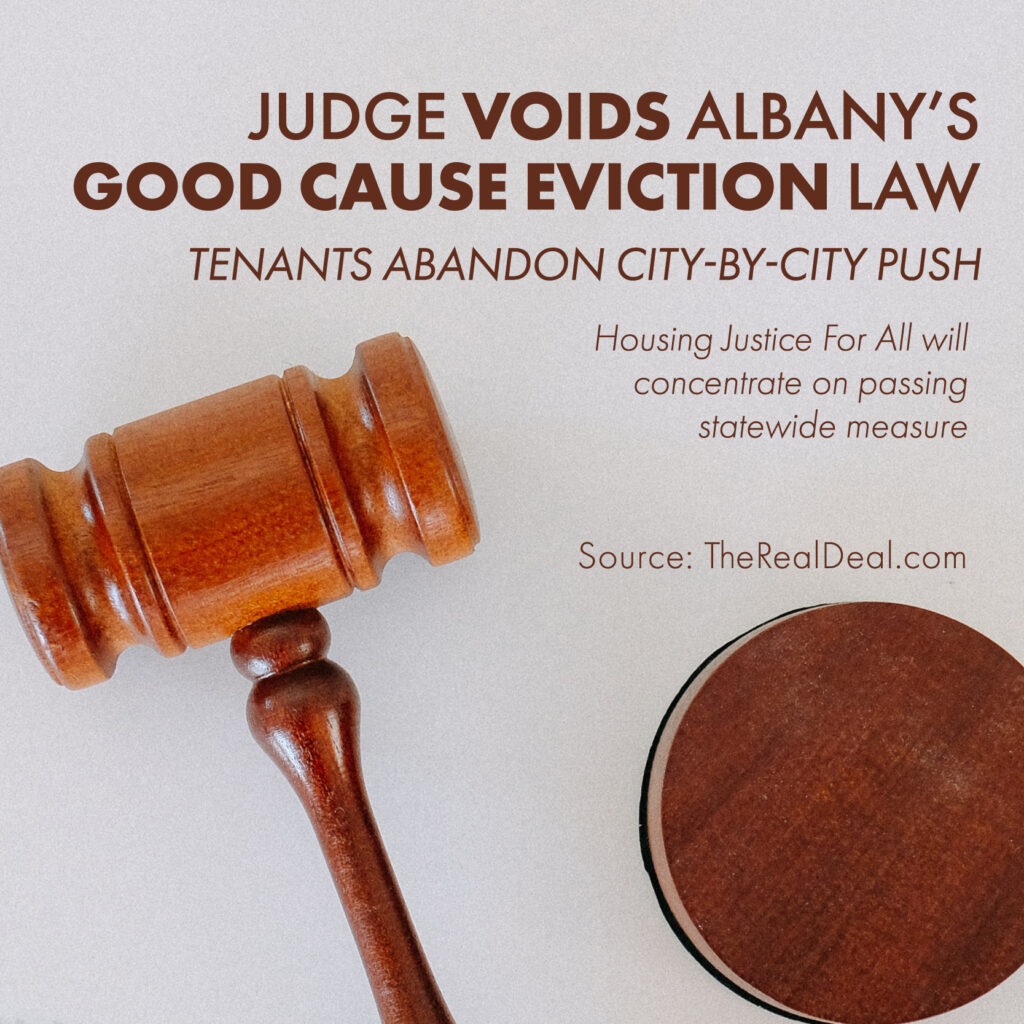 Housing Justice for All will concentrate on passing a statewide measure

By Suzannah Cavanaugh | Research By Kathryn Brenzel  at The RealDeal

Less than a year after Albany made history as the first New York municipality to pass good cause eviction, a state judge wiped it off the books.

Although the ruling involved only the city of Albany’s legislation, it effectively stops the spread of good cause eviction laws across upstate localities — and could lead to more being nullified.

The ruling — a victory for the landlord group New York Capital Region Apartment Association — could prompt challenges to several other local good cause eviction laws in New York on the same grounds.

Attorneys backing Albany’s eviction-protection policy said the ruling would not directly affect those passed by other localities. However, tenant advocates said given the setback, they would likely drop their city-by-city push for the policy and instead focus on garnering support for a statewide measure.

Ryba, citing numerous conflicts between the Albany law and state statutes, pointed to a portion of the state’s Real Property Law as one. The state legislation allows landlords to bump a rent by 5 percent or more, given that the owner provides “adequate written notice” to the tenant.

“The landlord’s right to increase rent is not conditioned upon a showing of good cause,” Ryba wrote.

Under Albany’s good cause measure, a court could determine that a tenant does not have to pay an increase if the rent hike is “unconscionable.”

Ryba wrote that the “good cause provisions of Local Law F clearly conflict” with landlords’ rights under the state’s Real Property Law. That was among the arguments brought by the NYCRAA, which formed in large part to fight good cause eviction.

“The local law was illegal on its face, violative of state law,” said Benjamin Neidl, the attorney representing Deborah Pusatere, NYCRAA’s former president and one of the landlords who brought the suit. “In Albany, this decision will restore the balance of rights between tenants and landlords as current state law intends.”

The decision is a blow to tenant group Housing Justice For All, whose advocacy work over the past year has led Poughkeepsie, Newburgh, Beacon, and Hudson to pass versions of good cause. New Paltz was considering was considering its own bill but decided to hold off until the Albany case was decided.

Housing Justice For All’s lead organizer, Cea Weaver, decried the ruling, calling it a “direct attack on Albany residents who overwhelmingly support tenant protection,” one that “undermines our democracy.”

“Thousands of tenants in the city of Albany have already utilized Albany’s good cause law to stop unconscionable rent hikes and prevent retaliatory evictions due to landlord lease non-renewals,” Weaver claimed. “Nullifying Albany’s local good cause law puts these families at immediate risk of displacement and destabilization.”

To pressure state lawmakers on a New York-wide bill, the group had organized support for local measures in cities up and down the Hudson River, a strategy it considered continuing after the state legislature failed to pass in this year’s session.

After the Albany ruling, Weaver confirmed that Housing Justice For All would likely abandon that incremental approach.

Weaver said the group planned to convene Thursday afternoon, drawing together local campaigns to debrief them on the decision.

Decisions at the district level, such as the Albany ruling, don’t set precedent for other courts, said Ellen Davidson, staff attorney at the Legal Aid Society. That means a plaintiff would need to challenge the good cause law in Poughkeepsie, for example, for a court to consider revoking it.

And just because one judge voids a law, doesn’t mean another will make the same decision. “Judges at the same level often disagree with one another,” Davidson said hopefully.

The Community Housing Improvement Program, a landlord group that has actively opposed good cause eviction, said it hoped future courts might toss the legislation because it’s preempted by the state’s rent laws.

A state bill, should one pass, could not be unraveled by the same preemptive doctrine that erased Albany’s legislation.

Because the good cause bill pending in the Legislature does not affect all apartments — rent-regulated tenants and those in owner-occupied buildings with fewer than four units would be exempt — Davidson said both the State Property Law and the good cause could exist concurrently.

“State laws do not preempt one another,” Davidson said.

In October 2021, the Federal National Mortgage Association was the first to announce updates to its guidelines and criteria changes for Condo and Co-op Projects.  These changes came in the wake of the tragic collapse of the Champlain South Tower...