Who Can Contest a Will?

A Will is one of the most important documents in an estate plan, not only because it allows you to dispose of your property as you wish but also to appoint a guardian to take care of your loved ones after you pass away. The Will only has effect after death, so the testator can revoke and change the document as many times as he/she wishes. Nonetheless, it’s important to make sure that if you revoke a previous Will by executing a new one that you follow the required formalities of your state when executing the new Will, so that there is no doubt as to which document shall be valid when you pass away as well as to avoid potential contests.

One of the greatest concerns of a testator is that someone could successfully contest their Will after their death, meaning that the Will would not be admitted to probate and the testator’s wishes would fall by the wayside.  A contestant (person contesting the validity of the will) can raise any matter that could result in the denial of probate such as improper execution of the document, lack of testamentary capacity, fraud, undue influence, revocation of a previous Will, etc…

To contest a Will someone must have standing, which means that the contestant may only be interested persons who would be affected by the validity of the Will such as beneficiaries mentioned in the Will, beneficiaries of a previous Will, and intestate distributees. Also, a distributee or a beneficiary without an economic interest could object to the appointment of an executor arguing that such executor was appointed through fraud or undue influence.

A viable solution to avoid a Will contest would be to include an “In Terrorem” or “No Contest Clause.” This provision will result in the forfeiture of a gift made to a possible Contestant named in the Will should the Contesting beneficiary fail. Under New York law this clause is usually given full effect, but there are exceptions to the general rule. For instance, in case a minor or an incompetent contest a Will, there will be no violation of such clause.

The bottom line is, Will contests can be time-consuming, expensive (with the Executor forced to use estate assets to pay legal bills, court fees and other expenses), and emotionally draining. Having an experienced Trusts & Estates attorney drafting and assisting in the execution of your Will can greatly reduce the risk of future contests.

Talita is a senior counsel of the Estates & Trusts team at CPL. Her practice focuses on advising high net worth clients and financial institutions in wealth and estate planning related to U.S. and foreign assets. 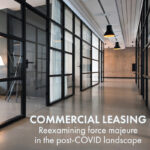 By: Leah Laframboise, Clay Pulliam, and Christina Sprecher of Reuters   The impact of the COVID-19 pandemic on commercial leasing was immediate and severe. Landlords and tenants were faced with challenges of a type and magnitude that neither they nor their...