Benefits And Pitfalls Of "Payable On Death" Accounts: The Curious Case Of Matter Of Totten And Vilhena V. HSBC

Not everyone has a trust. Some don’t even know what a trust is or how it works. Others think that trusts are one of those planning tools only utilized by the wealthy. But virtually everyone holds a checking or savings account at some point in their life, and not many people know that they could turn their bank account into a trust.

It’s true! Depending on your financial institution, you may be able to designate a beneficiary to your account in the event of your death, and voila! Your bank account is now a trust. The reality is that trusts are potentially within reach of anyone holding a simple checking or savings account.

This is primarily thanks to the ruling in Matter of Totten, a century-old New York Court of Appeals case that gave rise to what is colloquially known as the Totten Trust, creating a curious anomaly in trust law. In that case, the court ruled that a beneficiary designation on a bank account payable on the account holder’s death was valid even though it did not follow the formalities of creating a last will and testament. The court concluded that the account holder had essentially created a revocable trust, with herself acting as trustee. This type of account was later formally codified in New York’s Estate Practice and Trust Law (“EPTL”) and is now recognized in virtually every jurisdiction in the United States.

Call it what you will: “Totten Trust,” “Payable on Death (“POD”) designation,” “In Trust For (“ITF”) Account,” the result is the same. Once a beneficiary is designated (the “ITF Beneficiary”), any funds remaining in the account at the account holder’s will pass to the ITF beneficiary, so long as the account is not closed, defunded, or the designation removed during the account holder’s lifetime. Such a title can be a helpful planning tool for those who don’t want to deal with trust formalities, wish to maintain the account’s privacy, or avoid a probate procedure. It can be a powerful planning tool to complement an individual’s estate plan in the right circumstances.

However, the simplicity of its creation can also be the downfall of even the most well-intentioned layperson. For one, this type of account under the law is considered a “non-probate asset,” which in other words means that the beneficiary designation will control above all else, even superseding the terms of a last will and testament, unless certain strict formalities under the law are observed by the account holder when removing a beneficiary.

For instance, consider that New York’s EPTL requires that the terms of a last will and testament removing an ITF Beneficiary be done with a relatively high degree of specificity; a generic removal does not count. Furthermore, an account holder’s instruction to the bank to remove an ITF Beneficiary must be acknowledged either before a notary or some other witness, the absence of which would cause the removal to fail.

The Curious Case Of Matter Of Totten And Vilhena V. HSBC

This brings us to the case of Vilhena v. HSBC, decided last year in the Southern District of New York and in which I represented the Plaintiff. Several years ago, Plaintiff’s parents added him as an ITF Beneficiary to several savings accounts they maintained at an HSBC branch based in Manhattan. Following the death of the last surviving parent, Plaintiff attempted to gain access to the ITF accounts, but the bank informed him that, to his surprise, he was no longer a listed ITF Beneficiary. A search through his parents’ old files revealed a letter written several years prior to HSBC and curiously only signed by his Stepfather, requesting that the bank remove the Plaintiff as an ITF Beneficiary on all of the Stepfather’s accounts, including the ITF accounts. Notably absent from the letter was an acknowledgment of the Stepfather’s signature- either by a notary or other witness, as required under the EPTL.

I brought suit on behalf of Plaintiff against HSBC, requesting a declaratory judgment regarding his rights to the account under New York law. While I brought forward several arguments challenging the validity of the letter, ultimately, the court determined that the lack of a witness to the father’s signature rendered the Plaintiff’s removal as an ITF Beneficiary void under the EPTL, and thus declared the Plaintiff the rightful owner of the ITF accounts.

One final observation is another curious anomaly under New York law. Such an acknowledgment is only required when removing a beneficiary from “depository” accounts, such as a checking or savings account. Had this been a “custody” account (for example, an IRA brokerage account holding interests in mutual funds and other securities), then under the EPTL, no acknowledgment of the Stepfather’s signature would have been required. Had the parents also held brokerage accounts, Plaintiff would not have gained access to them, and such accounts would have passed to the Stepfather’s estate. Somewhat ironic considering that custody accounts tend to hold substantially more assets than your average depository account.

While this was a victory for my client, it’s a lesson that, as with any other estate planning document, a failure to adhere to certain strict formalities can drastically alter a decedent’s estate plan and create confusion and uncertainty for the heirs who are then left to pick up the pieces. When in doubt, contact an experienced estate planning attorney. 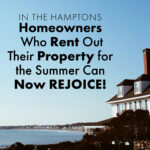 As we all know, the Housing Stability and Tenant Protection Act (HSTPA) of 2019 placed a limit on how much security deposit a landlord in NY can collect from a tenant (the equivalent of one month’s rent). However, on September...